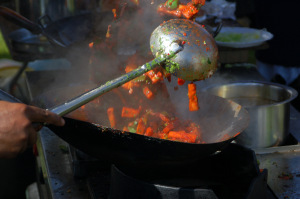 The smoke point of any oil is a clear indication of the temperature at which the oil starts to break down.   The actual smoke point of EVOO varies widely dependant upon the source one reads but a good average point is 210′C.   The following smoke points may be of interest:

When an oil, of any type, breaks down having reached its smoke point the by-products are cyclic benzene compounds, these are called polycyclic aromatic hydrocarbons (PAHs).  Turning to Wikipedia, PAHs have a bad name as being carcinogenic, mutagenic and teratogenic, however, there appear to be different levels of their toxicity but nevertheless, we don’t want to get involved in their production!   Once olive oil, like all oils, reaches its smoke point then there is the probability that toxic compounds will be produced.

When frying the best results occur when the food is placed into the hot oil and the natural sugars caramelize and proteins denature into a thin shell which protects the food from soaking up the oil.   The outside is crisp and the interior is just cooked.      Turning to the cooking pages on the internet and following up on the temperatures likely to be reached in normal cooking I find that deep frying of chips is carried out with the oil at about 190′C – well below the smoke point of EVOO.   BBQ temperatures over an open fire are also well below that but BBQs Galore indicate that with the gas-fired BBQs the temperatures could be much higher, up to 280′C.   It seems that using a wok is another of the most dangerous means of cooking with normal temperatures around 280′C and I have seen many different oils go past their smoke point when used in a wok.

I have found a research paper on the internet published in the Journal of the National (USA) Cancer Institute which suggests the high incidence of lung cancer in Chinese women may be connected with using high-temperature woks whilst cooking in enclosed spaces.

I guess that when faced with comments such as I have mentioned we can agree that for all normal household cooking purposes EVOO poses no health threat but if one wants to cook on a gas BBQ or use a wok then all lipids are in the danger zone and none should be used in enclosed spaces as the highest quoted smoke point which I have found is 270′C for avocado oil.   This also means that the fats in a normal steak will have broken down to produce PAHs!   I have heard it said that some of the fast food chains offering char-grilled steaks have been taken to task for just this reason.

EVOO is more stable than many of the other oils because it is high in mono-unsaturated fatty acids and antioxidants whilst being low in the unstable polyunsaturates and the lower the level of FFA the higher the smoke point.